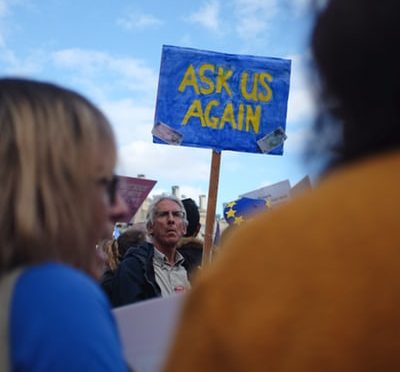 Many members of the “Remain Coalition” have been disappointed by the role played by the European issue in the leadership contest of the Labour Party. No candidate has suggested a policy of continuing opposition to Brexit.  Some candidates have on the contrary sought to argue that Labour’s ambiguous European policy during the General Election was responsible for alienating potential supporters favourable to Brexit.   Even the traditionally pro-European Keir Starmer, one of the favourites to succeed Jeremy Corbyn, has spoken of the General Election as resolving the issue of Brexit for the foreseeable future and has been unwilling to commit himself to campaign for British re-entry to the European Union. Such disappointment is understandable but may be premature. Keir Starmer has a leadership election to win, and if he wins it his highly-developed forensic skills will come rapidly to the fore in the dismantlement of the fantasies that underpin most rhetoric in favour of Brexit. The likelihood must be that if he does become Labour Leader Starmer will have plentiful opportunity to edge his party towards the unequivocal opposition to Brexit that most of the Party’s members and voters would favour. As 2020 goes by it will inevitably become more difficult for the Labour Party to maintain the theoretical distinction so beloved of Jeremy Corbyn between his Party’s opposition to whatever form of Brexit Boris Johnson ends up negotiating and opposition to Brexit itself.

Don’t leave it to the politicians

But whatever the precise evolution of opinion within the House of Commons over the coming months, there is a bitter lesson from the past three years that any future Rejoiner coalition must always bear in mind. It is that there is no reliance to be placed in current circumstances on the European policies of any of the political parties represented in Westminster. Hundreds of thousands of demonstrators flocked to London on 19th October last year and heard a wide range of pro-European British politicians calling plausibly and enthusiastically for a People’s Vote. Many of these speakers were particularly welcome to the demonstrators as apparently new converts to the cause. Within ten days these same politicians were voting for a General Election, the entirely predictable outcome of which has now destroyed any chance of a referendum to reverse Brexit for at least the five years of the present Conservative-dominated Parliament. This lamentable outcome was the fitting outcome to three years of dither, incompetence and prevarication by the political wing of the Remainer coalition. Most of the politicians in this coalition entirely recognised the enormous harm likely to be inflicted on the country by any form of Brexit. Only a very few of them were willing to draw the logical conclusion of this recognition by full-throated opposition to Brexit. Personal and Party considerations made the “long game” attractive to many. It was easier to argue against a “no deal” Brexit and for a second referendum than plainly to denounce Brexit’s inherent absurdities. When the final whistle unexpectedly blew on the 2017 Parliament it was clear how little advantage had been taken of the government’s Parliamentary weakness to mount effective opposition to Brexit. The triumphs of the anti-Brexit coalition had been exclusively procedural, temporising and symbolic. The robust Parliamentary majority won by the Conservative Party last December has swept away the flimsy foundations on which opposition to Brexit was built between 2017 and 2019.

The powerful arguments against Brexit have not been contradicted by the result of the General Election. Those hostile to Brexit have every right to maintain and even intensify their opposition to the damaging project as it unfolds over the coming months; and to argue that this catastrophic step should be reversed as rapidly as possible. If this Rejoiner Coalition is to be effective, it will however need to take a different form than it did between 2016 and 2019, being much less dependent on party politicians. The proliferation of pro-European groups and activities that have sprung up since 2016 suggests that there is genuine scope for the emergence of a pro-EU grassroots network that will act to exert public pressure on existing political parties rather than to be rule-takers from these parties. It will be many months before the disarray of the losing parties in the last General Election gives way to a more stable political environment. There will be an opportunity for various Rejoiner groups to consolidate their role as independent actors in the Brexit debate, a role that they were too willing over the past three years to sub-contract to their ultimately ineffectual political leaders.

If a new Rejoin Coalition emerging from the grassroots wishes to make its voice heard politically, its obvious initial role will be to act as a stringent and persuasive critic of the progress of the Brexit negotiations. It should have much scope to do so, as the most recent remarks of Sajid Javid vividly  illustrate (“Forget staying close to EU after Brexit, chancellor tells business”, Financial Times with paywall). Javid has now recognised that the economic impact of Brexit will create losers and winners, a far cry from the dishonest millenarian rhetoric initially favoured by Brexit supporters. Javid even criticised those British manufacturing sectors who had not in the past three years made changes to reflect and ward off the possible disadvantages for their industry of Brexit. This criticism sits oddly, even hypocritically in the mouth of a leading minister in a government that has spent the past three years telling British manufacturing industry that the damage and dangers of Brexit are minimal or non-existent. As the real and unpleasant choices of Brexit become clearer, such glimpses of the damagingly obvious and the obviously damaging will become more and more frequent. Public opinion and opinion in the mass media can change very rapidly. The sense of Brexit as a failing project is one that Rejoiners should lose no opportunity to disseminate throughout 2020.

To those following the Brexit negotiations closely it has become ever clearer since 2016 that the British government has a choice between an economically damaging and a politically unsustainable Brexit. The more distant the relationship between the UK and EU after Brexit, the more economic damage likely to be inflicted on the British economy. The more intimate the relationship, the more the UK will remain bound by European rules in which it has no say, thus negating the central aspiration of Brexit to “take back control.” But this intractable dilemma has not yet communicated itself to the British public. It will be the task of those favouring a rapid reintegration of the UK within the EU to ensure that the Brexit negotiations during 2020 are properly understood by British public opinion as the inevitable working out of this dilemma, with no remotely attractive solution achievable, or even conceivable. The extension of the transition period, the future of British fisheries, the future of British financial services, the  level playing field between EU and UK, the possibility of a “no deal”Brexit in January 2021, the very survival of the UK’s manufacturing base will all be issues on which the government will become vulnerable this year. On all these issues it should be increasingly easier to demonstrate that the painful choices faced or fudged by Boris Johnson’s government are the intrinsic consequences of Brexit. It will be in the clear interest of the government to divert attention from this increasingly obvious truth. It will be the task of the Rejoiner Coalition to demonstrate that it is indeed impossible to fool all the people all the time.

It appears from Sajid Javid’s most recent interview that the governmental pendulum is swinging at the moment towards favouring a more distant UK/EU relationship after Brexit. This stance may simply be a negotiating tactic, in the vain hope of increasing British leverage within the Brexit negotiations. Even if temporarily the government favours a more distant relationship with the EU after Brexit, it may well be that Boris Johnson will change his mind as the economic costs of this approach become more apparent. Perhaps the most likely analysis is that the British government is divided and its public utterances will oscillate unceasingly over the next six months between the horns of the various dilemmas on which Brexit impales it.   The Rejoin Coalition will be in the rhetorically advantageous position of insurgent critics always able to attack the most recent positioning of the government. They can do so in convincing good faith if they stress that the varying unsatisfactory approaches of the government to Brexit all derive from a common cause, the inherent impossibility of “making a success” of Brexit.  The Remainer coalition unnecessarily sacrificed effectiveness by too often muting its rejection of Brexit as a concept, concentrating rather on rejection of the various unattractive avatars of Brexit.

Past promises must not be forgotten

In his novel “The Book of Laughter and Forgetting” the Czech novelist Milan Kundera argued that totalitarian governments standardly claimed to be the shapers of the future, but more frequently devoted their energies to reshaping the past to their own advantage. There is more than a whiff of such narrative totalitarianism in the Brexit saga, well exemplified by Boris Johnson’s supposed veto on the use of the word “Brexit” in future. It is entirely understandable that he should wish to cast a veil of forgetfulness over all the lies and fantasy with which the term is rightly and irredeemably associated.  He will wish to drown in forgetful laughter his own record of ferocious opposition to Theresa May’s Withdrawal Agreement, which he then in essence accepted when he became Prime Minister.  Nothing could be more damaging to Johnson’s credibility and that of his government than a pitiless comparison between the real results of the Brexit negotiations this year and the claims regularly made by and on Johnson’s behalf about Brexit since 2016. The Rejoin Coalition will have in 2020 a wide-open goal of devastating comparison between Brexit fantasy and Brexit reality. It remains to be seen whether it botches this opportunity as comprehensively as the Remain coalition did after 2017.

One thought on “Brexit: Rejoiners must learn from their mistakes”

How different will this time be? Assessing the prospects for economic recovery from the Covid-19 crisisby Professor Iain Begg an Professor Jun Qian, 22/04/20

Things will never be the same again – how Covid-19 is re-shaping the future of Europeby Roger Casale, 15/04/20

Scotland, the UK and Brexit: Changing politics at a time of crisis
by Dr Kirsty Hughes, 06/04/20