Trump’s New World Order:
Brexit and Europe in a world turned upside down 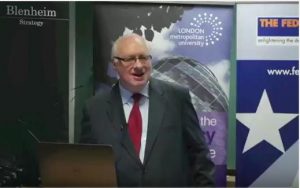 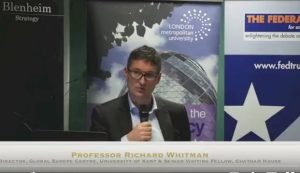 Donald Trump’s Presidency is likely to see a radical change of course for America and the world. What does theTrump presidency mean for American Foreign Policy, Brexit Britain and The European Project. Is NATO obsolete? Is Globalisation over?

Professor Stephen Haseler is the Director of the Global Policy Institute. He holds a Doctorate from LSE and held visiting professorships at Georgetown University and Johns Hopkins University in the United States. He is the author of numerous books, including The Super Rich, Meltdown: How the Master’s of the Universe Destroyed the West’s Power and Prosperity. His new book on Brexit, ‘England Alone’ , will be published in April.

Bruce Weinrod (via video link)
former Secretary of Defense Representative to Europe and Defense Advisor to the U.S. Mission NATO

Michael Lind (via video link)
Co-founder and ASU Future of War Fellow at New America in Washington, D.C.; contributing editor of Politico and The National Interest; and a columnist for Salon

Professor Richard Whitman
Professor of Politics and International Relations and Director of the Global Europe Center at the University of Kent, and visiting senior fellow of the Europe Programme at Chatham House