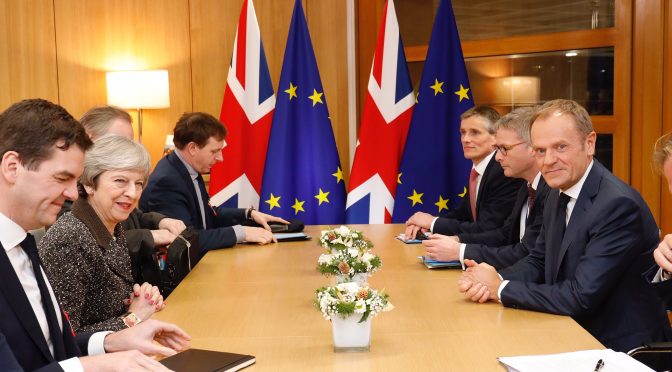 by Graham Bishop
Consultant on EU integration;
Founder of grahambishop.com

Become a Friend or Gold Friend of grahambishop.com
You can also follow Graham on LinkedIn.

The smoke may be clearing from the opening salvoes in the Great Negotiation War and I happened to be in Brussels for a conference just after the `negotiations’ finished last week. My clear conclusion is that the UK is about to be sacrificed on the altar of an ideological purity about independence that is a total illusion.

Conversations with leading experts (is one allowed to use that term nowadays?) and a wide range of very well-informed participants exposed the fallacy of the UK position vividly. The tone was set by EU Negotiator Barnier at his Press Conference afterwards (see end for the English). It seems the EU is also independent.  But Barnier did say “…However, I continue to believe that we can reach a good agreement for both sides.”

Will that belief persist into further negotiating rounds if for example, the UK backtracks on the Northern Ireland deal – freshly enacted by this Parliament and Prime Minister? If the UK is not seen to be preparing the ports for the new situation, there will be a big issue of trust and confidence. Presumably Northern Ireland businesses that are adversely effected will then litigate! The absence of foreign and defence policy from the UK negotiating mandate was also seen as a significant back-tracking from the commitment in the recently-agreed Political Declaration.

The EU is aiming for an overarching deal whereas the UK still seems to be looking for sectoral deals. As one participant put it pithily: “The EU is offering a five-course dinner with wine but the UK only wants a sandwich and a glass of water”. Whatever sectors are “not agreed” at the end of this year will fall over the cliff-edge as there will be no legal provisions for a further transition – though the EU retains the power to offer unilateral, temporary deals to protect itself.

The EU27 continues to display remarkable unity even with divergent interests – it only took 2-3 weeks to agree its negotiating mandate. They should be expected to remain united.

Conversations at the conference covered several geographic examples as well as the vital commercial issue of standards for internationally-tradeable goods – the very reason why Mrs Thatcher pushed for the creation of the Single Market (SEM) in 1985.

The UK situation: The BBC reported a year ago “At the moment, freight vehicles going through Dover are subject to passport and security checks. But under a no-deal scenario, EU-bound lorries will also need to complete custom declarations. Furthermore, certain UK goods arriving into EU ports may also require physical checks, under single market rules. This would apply to certain food, animal and chemical products – like insecticides….Dover has looked at the potential impact of more checks on lorries and – through independent modelling – has estimated that two minutes [author’s emphasis] of extra processing time for each lorry would lead to tailbacks of 17 miles.”

However, Imperial College researchers have calculated much larger jams would occur because “The UK currently has a free-flowing border in Kent: Passport checks are minimal and freight vehicles don’t complete customs declarations. It currently takes each vehicle two minutes on average [author’s emphasis] to get through customs.”

An “Australian deal” would see far more stringent passport, customs and physical checks than those on the Norwegian/Swedish border. The implications should be sobering for the Government in its negotiations.

Discussions also focussed on the actual trading standards that are applied in world trade rather than just EU trade. The soft power of the EU extends around the world due to the scale of its international trade. I have always been familiar with its role as the de facto setter of many global financial services standards so it was not surprising to hear about other examples such as REACH protecting us from hazardous chemicals.

Many countries have simply adopted REACH wholesale, others follow it less completely – it was said that Swiss REACH does not carry automatic access to the EU. So UK exporters who wish to be sure they comply with local standards in many countries around the world will simply comply with REACH. Paradoxically, if the UK does not maintain equivalence to REACH as it evolves, then companies will not be able to sell their products in the UK unless they set up a separate production line.

In the current world concern about environmental sustainability, the EU is explicitly setting out to provide a global standard via its budding “green taxonomy” of what goods and services are considered sustainable and thus eligible for improved terms e.g. in financing terms for “green bonds”. The continued use of GDPR by UK firms may be another example of UK firms simply following EU rules whatever the rules the UK Parliament enacts – demonstrating a loss of actual “sovereignty”. All these “Global EU” rules will be created/modified without the UK at the negotiating table so commerce will turn the UK ever-more into a rule-taker, rather than having its much-hyped “independence”. The free market – so beloved of Brexiteers – will shatter the illusion – not “Brussels”.