Brexit has the semblance of a new English Civil War

About the Author: Federal Trust

Brexit has the semblance of a new English Civil War

This article was first published on the LSE Brexit blog.

Brexit may be coming, but the terms are far from clear. In the range between the Norwegian model (membership in the customs union and single market without political participation) and a hard Brexit severing all ties with the EU, and even the long run dissolution of the United Kingdom, anything is possible. History rarely repeats itself, but some structures have a long life, writes Stefan Collignon (LSE). He argues that one of the fascinating features of the Brexit vote in 2016 was that it reflected the old trenches of the English Civil War in the 17th century.

The political map of the Brexit vote resembles the regional distribution of support for the King, Court and Tories against Parliament, Merchants and liberal Whigs. The geography of narrow conservatism and open-minded liberalism does not seem to have changed for centuries. The English Civil War reflected the tensions of early modern globalisation. During the first half of the 17th century, new technologies had created new opportunities for business, but the cost of managing the state had also increased rapidly. The traditional nobility saw a decline in its influence and a rise in the wealth of the gentry and merchants – the result of a tremendous expansion of markets.

It was from this middle class of gentry and merchants that the opposition in Parliament drew most of its support against the crown. They wished to do away with financial and commercial restrictions and resented the King’s interferences with free markets; they also wanted to have a say in such matters as religious and foreign policies, while the King sought to keep control over his traditional economic prerogatives. 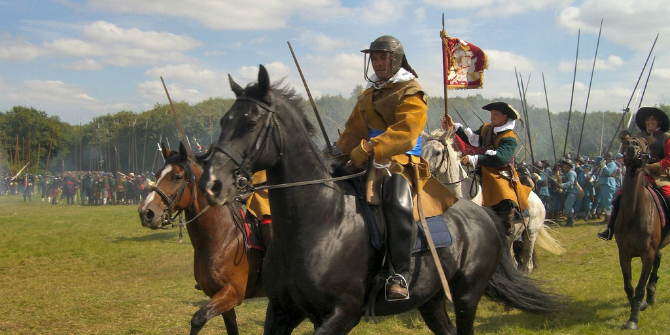 When the Civil War broke out in 1642, London’s economy was diverse and dynamic, closely connected through commercial networks with the rest of England as well as Europe, Asia and North America. But the traditional rural North and the West of England had become impoverished, and this is where the King and his Cavaliers drew support from Catholics and most of the Nobles. Even if the vagaries of the Civil War shifted over time, it is generally true that the strongholds of royalty included the countryside, the shires, and the less economically developed areas of northern and western England. However, the King had no support in Scotland and was paralysed by civil war in Ireland.

The Parliamentarians, by contrast, drew on the richer areas of the South and East, militant members of Parliament, and puritan merchants. The cathedral cities, which profited from foreign pilgrims, and all the industrial centres, the ports, and the economically advanced regions of southern and eastern England were typically parliamentary strongholds. See Figure 1a.

The Brexit vote, too, took place after half a century of accelerated globalisation. Expanding markets have transformed Britain and Europe. New elites have benefitted from fewer restrictions in Europe’s single market, while conservative Tories wish to keep the prerogatives of the nation-state. Europeanisation and globalisation have created winners in the new economy of England’s South and losers in the old industries of the North. The overlap between the maps of England during the “first civil war” in 1643 showing royal strongholds and those of the support for Brexit in 2016 is remarkable. Figure 1b indicates that the leave vote was strongly defended in the North and East and less in the South and West, while Scotland and large parts of Northern Ireland voted remain. 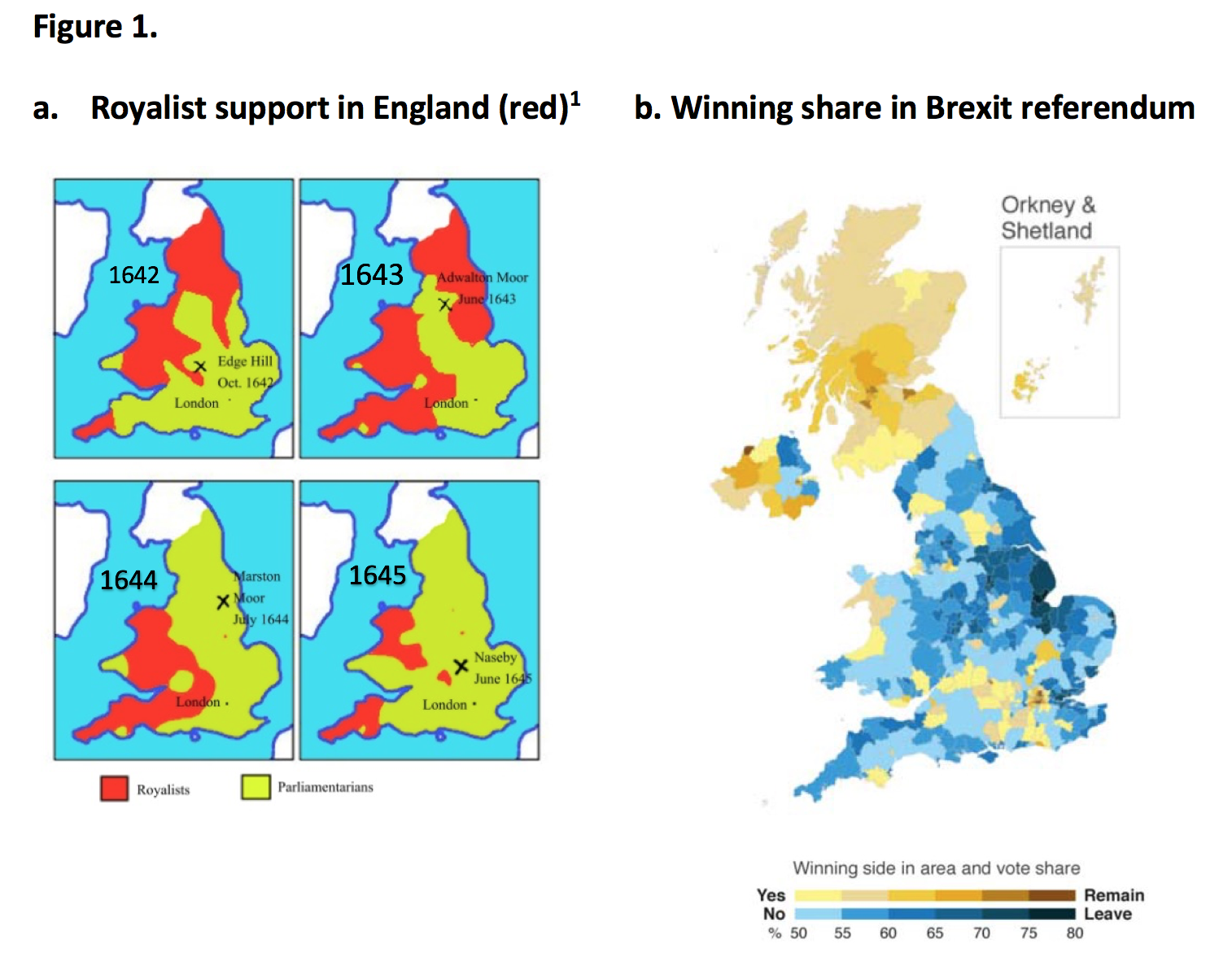 Thus, Britain has effectively returned to the politics of the time before it was a united kingdom. The Brexit vote has opted for the closed society that hopes to preserve the old but will keep the country poor, against the “open society” of improved prosperity for which the European Union stands. It is true that some Brexiters dream about turning the UK into a deregulated “European Hongkong”, but that does not stop them from promoting xenophobic nationalism. By contrast, European integration is based on the liberal idea that opening markets will overcome nationalism and generate a common culture.

What had made Britain the beacon of freedom and democracy after the Civil War was the victory of the liberal Whigs over the conservative Tories. This would have been impossible without the crucial role of Scotland and Ireland in the drama. The Scottish Rebellion forced the King to accept limitations to his sovereignty. Ireland was, at first, a fallback position for loyalists, but coming from outside Cromwell turned Ireland against reactionary Toryism.

Shall we see a similarly decisive role for Scotland and Ireland in the Brexit negotiations? The Scottish Government is now forging ahead with its own EU Withdrawal Bill – despite being told it is beyond the Scottish Parliament’s powers. Scottish nationalists wish to stay in the customs union and the single market and aim for a Norwegian option. A constitutional conflict seems inevitable. And the danger of locking people up behind borders is nowhere more obvious than in Ireland. The UK government has repeatedly stated that it does not want trade barriers between Northern Ireland and Britain, but a hard Brexit is simply not compatible with that option.

While history may not repeat itself, geography imposes constraints on what political actors can do. Scotland and Ireland have saved England from itself in the 17th century. It may well turn out, once again, that Scotland and Ireland will keep Britain open and defeat little England.

This post gives the views of the author, not the position of LSE Brexit or the London School of Economics.

Stefan Collignon is Professor of Political Economy at Sant’Anna School of Advanced Studies in Pisa and Senior Research Fellow at the European Institute of LSE. His most recent book is The Governance of European Public Goods. Towards a Republican Paradigm of European Integration, Palgrave 2018.