About the Author: Federal Trust Admin

The Federal Trust commissions monagraphs on a wide array of European issues from recognised experts. Most of our publications can be purchased on http://www.ibtauris.com/


Odd Man Out? Myth and Realities in the British Approach to the European Union edited by Brendan Donnelly and Hennig Meyer (2009) 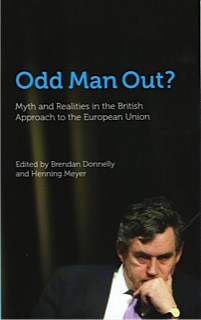 For some politicians and commentators, Britain is always destined to be the ‘odd man out’ in the European Union, with a history and set of political attitudes which must always pit the United Kingdom’s interests against those of its neighbours. For others, such claims of British exceptionalism are at best much exaggerated, and to the extent this exceptionalism exists it arises largely from subjective rather than objective factors. This collection of essays reviews British attitudes towards a number of current European issues. It does not attempt finally to decide the controversy about British exceptionalism, but rather to provide material for a more informed debate on this complex subject.

Regional Identity and Diversity in Europe : Experience in Wales, Silesia and Flanders edited by David M. Smith and Enid Wistricht (2007) 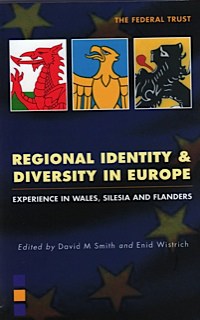 In recent decades, the population of Europe has become increasingly diverse. While discussion is normally dominated by questions of national identity, regions within European states have significantly raised their political profiles. This book is based around the study of three regions in Europe; Wales, Silesia and Flanders. It explores through focus group research the development of these regional identities, and how they are derived from the complex interaction of race, religion, language, culture and historical events. The findings shed light on wider questions of identity – at the national and European level. 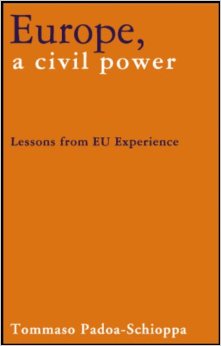 These essays expound with great clarity some important lessons to be learned from the uniting of Europe over the past half century. Tommaso Padoa-Schioppa, drawing on his broad knowledge of European history, politics, economics and culture as well as his deep experience of European and international co-operation, analyses a number of the fundamental relationships involved: between the member states and the European Union, and between Britain and the Union in particular; between national cultural heritages and the making of Europe; between the economics and the politics and institutions; and between European integration and the process of globalisation. He shows both the extraordinary achievements of this adventure and the contradictions and incompleteness that still characterise it.

Tommaso Padoa-Schioppa is a Member of the Executive Board of the European Central Bank. Previously he has served as Deputy Governor of the Banca d’ltalia, Director-General of Economic and Monetary Affairs at the Commission of the European Communities and Chairman of CONSOB (Commissione Nazionale per le Societa e la Borsa). Actively involved in European and international co-operation in the last 25 years, he has played an influential part in the making of Economic and Monetary Union and has held several senior international posts, including Secretary of the Delors Committee on EMU and Chairman of the Basle Committee on Banking Supervision. His books include Efficiency, Stability and Equity (Oxford University Press, 1987), The Road to Monetary Union in Europe (OUP, 1994, 2002), Regulating Finance. Balancing Freedom and Risk (OUP, 2004) and The Euro and its Central Bank(MIT Press, 2004).

Not In Our Name: Democracy and Foreign Policy in the UK edited by Simon Burall, Brendan Donnellyand Stuart Weir (2006)

Not in Our Name looks at Cabinet government and the checks and balances that the Houses of Parliament can impose, the importance of parliamentary committees, Britain’s relations with Europe, Britain’s global dealings andd our general interests abroad.It concludes with a series of recommendations designed to make international policies more accountable and transparent.

The EU and Romania edited by David Phinnemore (2006)

Romania will soon be a member of the European Union. Yet few people are aware of how the country has evolved since the revolutionary events of December 1989 and under what circumstances membership has been achieved. Equally, what membership will mean for Romania and for the EU has received little attention.

Drawing on contributions from academics and those involved in Romania’s integration with the EU, this timely volume provides insights into the progress Romania has made with economic and political reforms on its challenging and often difficult journey to EU membership. It assesses from a range of perspectives the significance for both Romania and the EU of the country’s imminent accession to the EU and the challenges this raises.

The United States of Europe by Guy Verhofstadt (2006)

France and the Netherlands have said no to the European Constitutional Treaty. The reasons for this no were varied. In addition to domestic political motives, contradictory fears were in play. Some thought the Treaty brought with it ‘too much Europe’. Some thought it did not bring enough Europe. Others, particularly in the Netherlands, were protesting against the supposed cost of Europe. Yet others thought that the European Union’s enlargement has gone ahead much too quickly. What is the next step? Europe is at a crossroads. But the choice is simple. Should we let Europe shrivel to a simple free trade zone, as some wish? Or do we take up again the European challenge and create a genuinely political Europe, a Europe that can play a role in the world; a Europe with the capacity to modernise its own economy and respond to the economic developments coming from China, India and Japan. The Belgian Prime Minister, Guy Verhofstadt does not mince his words. He wishes to create a ‘United States of Europe,’ with all member states of the European Union participating if possible, with a group of ‘pioneers’ if necessary. His book is required reading for anyone who cares about Europe.

Guy Verhofstadt was Prime Minister of Belgium from 1999-2008, being reelected in 2003. From 2008, he serves as the leader of thr ALDE in the European Parliament.

Regaining Europe: An Economic Agenda for the 21st Century by George Irvin (2006)

In this important new book, the economist George Irvin argues that if the euro is to survive, it needs to be run in a more sophisticated and flexible manner. The author explains in layman’s terms the mistakes made in settuing up the euro and argues that many of the European Union’s current political difficulties flow from these errors. He calls for a more balanced approach to running the single currency, in which EU budgetry rules are revised, national governments are given greater fiscal autonomy and efforts are pooled to strengthen EU-wide macroeconomic management.

George Irvin believes that the present political crisis of the European Union needs both a political and economic response. This book is a powerful and accessible account of how a more politically directed Eurozone could lead to both economic and political success for the European Union. It is a roadmap for the Union to escape from the stalemate created by the French and Dutch referendums.

‘My starting point for this book is that federal thinking and federal ideas can make an important contribution towards resolving some of the major issues in contemporary British government.’ Stanley Henig

Stanley Henig has enjoyed twin careers as an academic political scientist and a practical politician. He has held academic appointments at the Universities of Lancaster, Warwick and Central Lancashire and also at the Civil Service College. In the 1960s he was a Labour Member of Parliament and in the 1990s Leader of Lancaster City Council. In the latter capacity he was also a senior member of the Local Government Association. Since 2001 he has been a Senior Research Fellow at the Federal Trust.

The Struggle for Europe’s Constitution by Andrew Duff (2005)

Andrew Duff MEP was a leading member of the European Convention which produced the first draft of the European Union’s controversial Constitution. In this important new book, he analyses the Convention’s successes and failures, and he describes the final negotiations and their outcome. Andrew Duff believes that a durable constitutional settlement is vital for the future of Europe. He explains how the Constitution would strengthen the EU at home and abroad. The rejection of the Constitution by French and Dutch voters makes more, not less urgent this agenda for building a more democratic and effective Union.

In this timely book, Andrew Duff urges Europe’s leaders not to abandon the worthwhile proposals put forward by the European Convention. He suggests how the Union could emerge from its current political crisis by undertaking a judicious renegotiation of the Constitution designed to overcome the difficulties surrounding the ratification process. This is the first book in English to get to grips with the European Constitution, and Andrew Duff is the first participant to argue for the rescue of the project.

“I am delighted that such a distinguished scholar and politician as Andrew Duff has devoted a book to the Constitution for Europe.”

José Manuel Barroso
President of the European Commission”I know of no greater expert on the theory and practice of European governance … His book will be invaluable.”

Peter Mandelson
Former Member of the European Commission
“The reader will discover that its author, Andrew Duff — convinced European, previous active member of the Convention and ami de Laeken — is in a very good position to elucidate the genesis, contents and significance of the Constitution…”

This timely publication comes at a period of unprecedented transformation in Europe and in Turkey. The European Union is coming to terms with its recet Enlargement to include ten new states. Turkey is making great progress in international modernisation. Each is watching the other carefully as negotiations for future EU membership get under way.But can the EU expand to include a large state with a Muslim culture? Does Turkey’s future lie as a potential member of the European club or instead as a privileged partner?This book is a multi-disciplinary attempt to illuminate the dimensions of the challenge from different perspectives. Its contributors include academics and analyses, politicians and practitioners from Turkey, Europe and America. Its breadth, depth and relevance will make it an invaluable source of reference. It will be essential reading not only for the academics and policy makers but also for the wider circle of reader concerned with the future of Europe and Europe’s relations with the Islamic world.